The demand for sensors is riding a high tide now, the process industry is faced with the imperative need for greater quality control, which cannot be managed without monitoring every tiny detail. Sensors are embedded almost everywhere… to measure and monitor the speed, whereabouts and general health of automobiles; to survey environmental conditions; to monitor safety along industrial borders; to measure the temperature and other parameters of chemical processes; and much more.

Several reasons can be attributed to the growing popularity of sensors – improvements in chip technology have resulted in smaller, cheaper yet more accurate sensors that can be embedded anywhere; today’s sensors consume less power and even traditional power sources last for a long time; some new age sensors can even sustain themselves on the energy weaned from wireless signals; plus, developments in alternate energy have led to sensors that can be fuelled by ambient energy such as solar; wireless technologies have made the installation and use of sensors less cumbersome; advancements in software technology have ensured that the information collected by the sensors is put to best use whether for monitoring processes or for further trend analysis.

According to the Freedonia Research Group, the demand for MEMS-based and imaging sensors will grow the fastest while process variable sensors to monitor pressure, temperature, flow and level will continue to be the largest segment. The automotive industry will also remain a huge market.

According to the group, till 2012 imaging and proximity or position sensors are expected to record the fastest growth. Imaging sensors – including charge-coupled devices (CCD), complementary metal-oxide semiconductors (CMOS) and thermal (infrared) sensors – will register the fastest gains of all sensor types. Of these, the CMOS-based imaging sensors will be more popular because of their lower costs, lower power requirements and higher speeds. Thermal imaging sensors will be used more for military applications, by police departments, fire departments, structural testing companies, original equipment manufacturers (OEMs) and private consumers.

Automobiles as a key consumer of Electronics
The automobile industry is using electronics at a furious pace. By the estimate of some popular subject bloggers, a high-end car might use around 70-100 intelligent chips! In fact, even 8-bit and 16-bit microcontrollers do not suffice the needs of today’s vehicles and the industry uses 32-bit ones.

Electronics play a huge role in automobiles – to monitor emission and other such factors subject to environmental regulations, for safety control, and infotainment.

High-end control systems are used to boost performance and energy regeneration efficiency of batteries; sensors are used to monitor emission; radio frequency identification (RFID) tags are used to identify spare parts and track their age; sensors are used to keep tab of the temperature of vital parts such as the engine and tyres; the convergence of video, audio and data is used to entertain the user as well as to provide information updates; mobile technologies are playing a huge role in ‘connecting’ the vehicle with the outside world; navigation systems ensure the automobile is on the right track at all times; geographical positioning systems (GPS) help keep track of the position and speed of vehicles– a boon for logistics firms; other electronic systems are used for remote diagnostics, vehicle immobilisation systems, collision detection, etc. In such and many more ways, electronics is playing a huge role in vehicles. 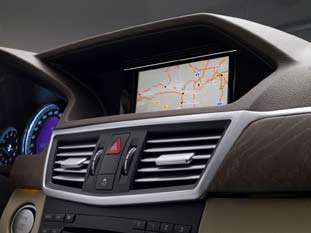 The in-car display that will soon be a part of the dashboard of most cars will be the symbol of the ‘connected’ car. It will be the interface through which the driver interacts with all the electronic systems mentioned above. Experts say it will also play a key role in connecting the car with the Internet and other consumer electronics used at home, at work, and on-the-go.

The author is a freelance writer based in Bengaluru. She writes on a variety of topics, her favourites being technology, cuisine, and life