Dilin Anand is a senior assistant editor at EFY

Neil Harbisson, 32, can receive phone calls directly into his head. He can perceive colours invisible to the human eye. He has an antenna that sprouts from the occipital bone in his Bluetooth-enabled skull. Neil is not a sci-fi movie character, nor from the future; he is the world’s first legally-recognised cyborg.

Just like Neil, wearing and later embedding electronics is now becoming part of life for an increasing number of people. “Wearables, a nicer name for wearable computers, are not just technology strapped onto body parts. These will play a significant part in the Internet of Things (IoT), which aims to connect everyone and everything with each other,” says Deepak Thomas, India sales manager at CSR.

While some people wear electronics to help them perceive their surroundings more deeply, others wear these to keep track of calories, distance walked, heart-condition and other parameters. 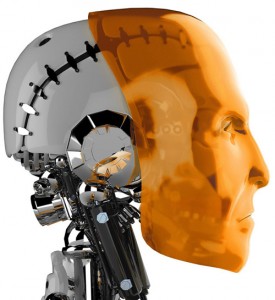 Did you know there are people who can sense their laptops beginning to stall, or if their hard drives have begun to spin-up under load? An article by Quinn Norton from Wired had talked about this almost a decade back. Fast-forward to the present, and adding new sensor technology that complements or supplements our existing five senses has already gained steam.

The Internet went wild with news coverage when people began adding rare Earth magnets implanted in their fingertips, but in 2015, you have dedicated bio-hacker communities, like biohack.me, set-up to support grinders (people who practice body modification to extend and improve human capacities). With this trend already up and running, humanity just might move at least a few steps closer to becoming entities like the cybernetic Borg species from the fictional world of Star Trek.

What new role does sensing play in this
After measuring calories, steps and distance, measuring heart rate is the new goal every fitness device developer aims to perfect this year. Vendors like Valencell specialise in clinically-validated biometric technology, and have come out with newer heart-rate-monitoring technology, powered by better sensors and algorithms. Their PerformTek sensor technology is licensed by the likes of Jabra, Scosche, LG and ATLAS. One important feature of their photo-detector-powered heart-rate-monitoring technology is its ability to be scalable to multiple form factors, like earbuds, armbands and wrist devices. Companies such as Belgium based imec are working on optical sensors that can give accurate pulse and blood oxygen levels, and wearable ECG sensors to monitor your heart function.

Perhaps, the most interesting of all is Xelflex technology, which enables a garment itself to become the sensor. Developed by Cambridge Consultants, the fibre-optic-thread based garment provides the user with guidance and feedback on his or her movements and can be used for a variety of purposes, like sports and fitness activities. A small electronics pack clips on to the garment, where data can be processed and made sense of.

According to a paper published in Advanced Function Materials, researchers at Singhua University and Nanchang University in China have claimed that it is possible to use grapheme-strain sensors to monitor vital signs on a human body. This technology, once developed, could be implemented into implantable devices or on electronics skin. For instance, the strength of motion created when a person moves creates a larger strain on the sensor, which allows the signal to be recorded and monitored easily. 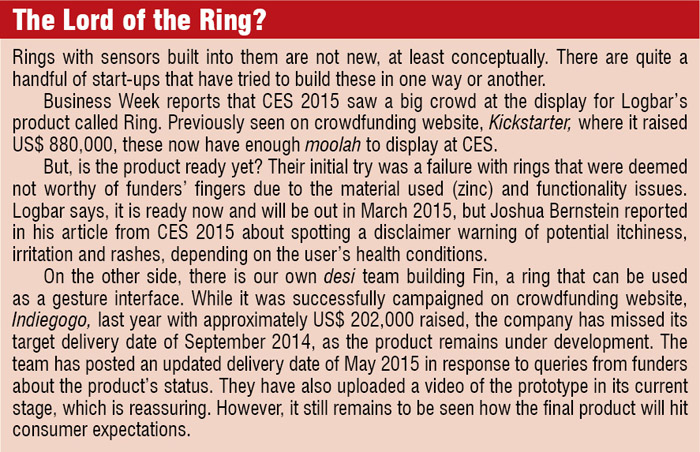 Using wearables as the first information tool in sports is another trend that is picking up, and about time too. Last year’s FIFA World Cup Final saw one example, where a German player was injured after getting a shoulder-hit to the head. The player played for some time after the hit, before it was realised that he had a serious injury.

Blackbox Biometrics and MC10 are two companies that have been building technology for this sector. By measuring the magnitude of motion and rotational forces in the environment around the brain, these sensors can give an idea about the actual impact to the brain and the chances of potential injury.

University of Michigan is working on millimetre-scale energy-harvesting sensors, such as a wireless intra-ocular pressure sensor that is intended for glaucoma patients to measure and report the pressure in the eye. “All elements, including the sensor, solar cell, energy storage, MCU and radio, could be part of this sensor. The university has indicated that it occupies a volume of only 1.5mm3 (0.5×1.5×2.0mm3) and can be implanted with a minimally-invasive procedure that is routinely used for cataract surgery. Commercialisation is anticipated in two to three years,” adds T. Anand, managing director, Knewron.

Smarter algorithms. Sensing data alone is just halfway to the goal when it comes to wearable devices, because the amount of noise in an everyday-use environment is pretty high. PerformTek sensor module technology, mentioned earlier in this story, has a signal-extraction method that removes noise from skin movement and footsteps, as well as the environment, to keep data clean. Additional algorithms are then run on this to accurately extract heart rate, respiration rate and other parameters. An additional proprietary algorithm leverages accelerometer data to measure running and cycling cadence, calories burned and distance travelled.

But, why did it take so long for these applications to be tapped?