“Electronics are rigid and boxy, while humans are soft and curvy.”

First heard at the D11 conference in 2013, this statement is a simple way to understand the challenge put forward by wearables. You need circuits that can follow the form and elasticity of its user, yet keep functioning optimally.

MC10 and Multek are examples of companies that seem to have understood the limitation of conventional electronic board technology when considering their utility for wearable-device designs. One of MC10’s patents is for what is termed as extremely stretchable electronics. The invention is built around the idea of using two isolated electronic components attached to an elastic-substrate material. An electrical interconnection is placed between components that maintain electrical characteristics, while the substrate is stretched.

An interesting MC10 design is Biostamp, a sensing sticker technology that can be placed on the skin. It stretches and flexes along with the skin, while maintaining the functionality designed into it. It can measure a variety of physiological functions, like data from the brain, muscles, heart, body temperature and movement.

Flexible printed circuit board (PCB) is a technology that has been around for some time. Multek has expertise in manufacturing flexible PCBs, and available technologies include standard flex and rigid flex, and also newer technology, like Novaflex HDI that features high-density interconnects. Novaclad is a material from Sheldahl, which is made-up of ultra-thin build-up of copper materials for flexible circuits.

Newer technology designed especially for wearables is the fabric circuit board. Developed by Xiao-Ming Tao and her team from Institute of Textiles and Clothing in Hong Kong, it is a highly-stretchable fabric formulation that can withstand multiple machine washes. The material has multiple filaments of pre-stretched elastic yarn and polyurethane-coated copper fibres. These are combined to form a thin material that can have microchips and components fixed on it, whose electrical connections are maintained even when stretched. 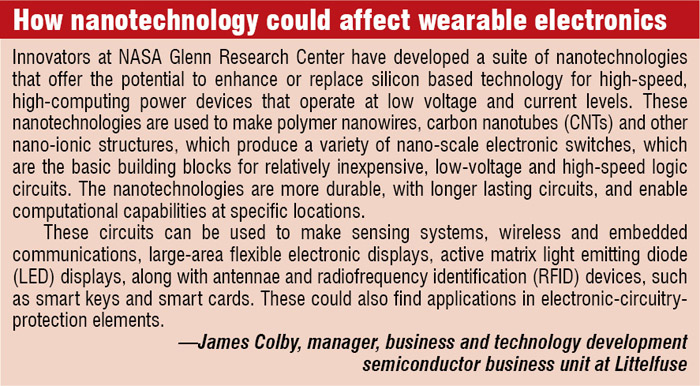 An interesting example of these materials being used is in a policeman’s bullet-proof Kevlar vest. If the policeman is shot, then the material senses the bullet’s impact and calls for back-up automatically. This allows the policeman to focus on the situation in front of him.

Another example of electronics-infused textiles started right here in India. Nihal Kashinath, founder, IoTBLR, one of the largest IoT-focused meet-up groups in the world, says, “At IoTBLR, we prototyped a programmable shirt—a shirt on which you can load apps, such as music controller, slide-show controller, remote-camera controller, movement tracker and panic button. The project was spun-off as a separate company, ThingsEvolve, where specific use-case shirts and other apparel are being developed.”

With great features comes great power consumption
The power problem is certainly not an easy one to solve, particularly in the wearable segment. “Today’s technologies are allowing engineers to harvest and manage low-power (nano) from a variety of sources, including solar cells, thermoelectric cells, electromagnetic and vibration energies. These technologies are providing designers with more options to charge batteries while the device is in use,” says Sachidananda Karanth, senior technical architect, Mistral Solutions.

Energy harvesting from movement, heat, light and even ambient radiation is being explored for wearables. Nihal explains how the selection of energy-harvesting method depends heavily on use-case (if it is a sleep tracker, kinetic-energy harvesting would be a poor choice) and power requirements of the device’s features (if your wearable camera needs to be used for advanced image processing, energy harvesting will not be of much help).

Thin-film-battery technology is already being implemented in electronics, like Biostamp from MC10, that has partnered with Braemar Energy Ventures for its solutions. One example is Solicore, which provides flexible thin-film lithium-polymer batteries that are less than half a millimetre thick and yet hold up to 25mAh while delivering three volts. These allow design engineers to disregard bulky conventional battery designs while developing the product.

New wearable designs must support an increase in functional integration, as well as offer a reduction in overall power consumption, cost and physical footprint. “These cost-sensitive embedded designs require a move away from the traditional arms race of MIPS, bytes and megahertz, and a paradigm shift into the era of function enablement,” explains Marten Smith, marketing manager, Medical Products Group, Microchip Technology Inc.

Another technology available is for those devices whose design enables these to gain from harvesting energy from the environment, like sunlight. What is required is a high-efficiency thin-film-photovoltaic technology. Organic photovoltaic seem to be one potential candidate here. One company, named Solarmer Energy, has been successfully working on organic photovoltaic technology that could be used to make power-generating fabrics. Other firms in this segment are Eight19, Heliatek and Dyesol.

Korea Advanced Institute of Science and Technology (KAIST) has a team working on developing a flexible glass fabric based thermoelectric (TE) power generator that produces electricity from the heat generated by a human body. Their journal states that they used a screen-printing technique to build the generator, which can be used to power self-sustaining devices. “With this technique, it is possible to make the device thin (~500μm), light-weight (~0.13g cm−2) and flexible,” light enough for wearable devices.

At CES this year, Intel’s CEO, Brian Krzanich, plucked a button from his blazer and explained how that is Intel’s new Quark SE SoC-powered device named Curie, their latest development module targeting the wearable market.

Deepak adds that a California based start-up, Imprint Energy, is developing flexible and rechargeable batteries that can be printed cheaply. Yes, printed! In the meantime, smaller batteries mean shorter battery life, which will need advancements in wireless power and charging, over and above what wireless power alliances, like Qi and A4WP, are supporting today.

“A lot of research is being done to solve the battery-power issue. Imprint Energy has come up with an ultra-thin and flexible battery that can power your wearable gadget, by making it less bulky and more designer friendly. They have used Zinc battery technology, called ZincPoly, which is stable and safer than conventional lithium based batteries. Screen printing is the technology used by them to create custom-shaped batteries for wearables,” says Arvind Sanjeev, founder of DIYHacking.com and creator of the indigenous Google Glass clone.

He adds that transparent wearables is something that is gaining a lot of attention. Imagine wearing a transparent band/watch, wouldn’t it be cool? The major hindrance towards making this a reality was batteries, which had to be transparent too. However, SLAC National Accelerator Laboratory has come out with a solution to this as well, by making transparent batteries using a transparent, slightly-rubbery compound known as poly-di-methyl-siloxane (PDMS).

T. Anand also explained about an alternative battery technology that sounds interesting. “A new alternative in the form of solid-state batteries is coming up. These batteries would be fabricated over silicon dye and would undergo almost the same process as that of chip manufacturing. These batteries are expected to have very-high-density energy stored, just like a chip would contain millions of transistors.”

Materials technology is now more significant than ever
When the game is about building products that are in constant contact with human skin, choice of material gains a new level of significance.

While selecting materials might seem purely cosmetic to some, there are examples where a wrong selection has resulted in a rash of recalls (notice the pun). Fitbit Force was one such product that had to be recalled due to complaints of irritation by customers. The cause was presumed to be either the nickel in the stainless-steel part of the device or adhesives used in the strap. This was so serious that it resulted in the initiation of an investigation by Consumer Product Safety Commission of the UK. Another example is the use of zinc in Ring gesture device by Logbar, which caused signal interference.

“Over US$ 100 billion will be spent on materials for wearable electronics in the coming decade,” reports Dr Peter Harrop and Dr Guillaume Chansin in their research report, Wearable Technology Materials 2015-2025.

While sports products like my Jawbone UP24 came with hypo-allergic medical-grade TPU rubber, premium products like Apple’s iWatch are claimed to come with stainless steel, silver aluminium or 18-karat yellow and rose gold. Nike’s FuelBand came built with a mix of thermoplastic elastomers, polypropylene, magnesium and stainless steel. Fitbit band was also marketed as having a flexible, durable elastomer material without latex. Fitbit’s clasp is made of surgical-grade stainless steel and contains traces of nickel.

Looking at the material space, it looks like luxury brands have their own game to play here. For instance, Mont Blanc (yes, the old upmarket pen company) has launched an e-strap for their line of luxury watches. Made from leather with a carbon-fibre texture, it holds an organic LED display in a carbon-coated steel housing.

In an example of taking it all the way, Austrian luxury brand Swarovski has teamed-up with Misfit to create a giant crystal, embedded with an activity tracker that can be matched with whatever pieces of jewellery you have from Swarovski. This could be a dangerous combination for your purse if you have a nerdy girlfriend, but it is still impressive from a purely technical standpoint.

Will society accept wearing and implanting electronics
When computers were first introduced, there was uproar on the jobs it would displace, the automatons that would substitute humans at work and the emotion-less digitisation of life. Today, we have computers on our desks and laps, in our cars, homes and pockets. Wearables and implantables will probably have the same destiny. Dr Nagesh tells us that, under Obama Care, America is planning to use implantables for greater social benefit.

It seems apt to use the most-used dialogue of the cybernetic Borg here, and quote: “Resistance is futile.”