With an LED driver of power factor one, the current consumption would be around 0.11A. At a power factor of 0.95, it would be slightly higher. At a power factor of 0.25, the current consumption would amount to 0.45A, which corresponds to that of the incandescent lamp—the actual LED output would, however, only be 25W. The remaining 75W is returned through the ‘wrong’ phase back to the mains. The energy is thus not lost and the reactive current is not metered by the power meter.

For AC/DC drivers, active power factor correction is, however, as important as high efficiency, especially if one takes into account that billions of such drivers will be connected to the mains over the next few years. Power factor correction is therefore not so much geared towards keeping electricity costs down, but helps maintain the quality of the mains power by eliminating harmonic interference.

Rapid pace of development in the field of power LEDs and drivers
For the foreseeable future, the industry is focusing on solutions for the existing infrastructure in residential and office buildings. For LED luminaires, this means that they must thus be dimmable with conventional TRIACs. This creates a number of technical problems, since the leading or trailing edge control of dimmers and PFC circuits of drivers interfere with each other. Conventional drivers can therefore not be dimmed down to zero.

A function that allows dimming to 10 or 20 per cent is, however, not satisfactory, as conventional incandescent lamps can be dimmed to much lower levels. In addition, the colour temperature of a dimmed incandescent lamp is shifted to much warmer levels, while LEDs show no such shift. The 10 per cent brightness of an LED luminaire powered with a residual current is therefore perceived by the eye as much higher, equivalent to about 35 per cent brightness of an incandescent lamp. Dimming to levels below 5 per cent is thus even more crucial for LED lighting systems. 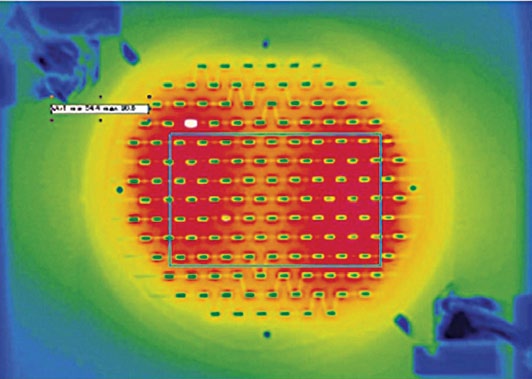 In the recent past, LEDs have also been developed further at a rapid pace. Initially, several individual 2W or 3W LEDs with separate housings were combined on a PCB. Today, the trend is clearly towards multi-chip solutions. For this purpose, a number of small LED dies are mounted on ceramic chips. The ceramic substrate improves heat management across the entire LED array (Fig. 3).

In addition, such LED arrays require much less space, and the entire luminous surface is covered by a phosphorus coating so that the multi-chip LEDs appear as one single light source. This facilitates the design of reflective and optical devices. 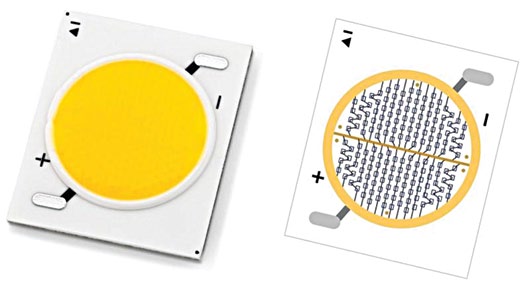 Fig. 4: The new MegaZenigata from Sharp (left) contains 168 individual LEDs combined in an array (in series and parallel) powered by approx. 38V DC and a constant current of 700 mA (Image courtesy: Sharp)

This can be well illustrated by the 25W MegaZenigata from Sharp: a total of 168 LEDs arranged over an area of just below 2 cm2 (Fig. 4) are wired to form an array. This array can then be mounted on the MegaZenigata, using a specially devised LED driver.

The LED driver provides a constant-current output of 700 mA up to 42V, so that the MegaZenigata produces 2600 lumens at 4000°K, corresponding to the luminous flux of a 150W halogen spotlight. Of course, the quality of the light plays a major role. While daylight reaches a colour rendering index of 100, the MegaZenigata achieves a respectable 83. The MegaZenigata is thus not only efficient but also offers a light quality and a colour temperature close to that of natural light.

Summary
In the future, manufacturers of LED drivers will cooperate even more closely with LED chip producers in order to take full advantage of the possibilities of new lighting technology. While energy efficiency and long service lives remain the main concerns, quality of the light is also a major issue, since it determines how we perceive the light.

The trend towards LED lighting systems will bring billions of new drivers into the global market over the next few years, which all need to be connected to mains networks. Because they will all produce harmonics and reactive currents, drivers need to have not only a high efficiency rating but also a good power factor. Values around 95 per cent should therefore be considered long-term guide values, even if they are not yet required by the relevant standardisation organisations.