Enormous installation of mobile phone towers in thickly-populated areas of many cities throughout the world has raised health concerns due to the existence of high-level electromagnetic radiation in the vicinity of these towers. Let us learn the techniques to reduce these radiations -- Dr Rajiv Kumar Singh 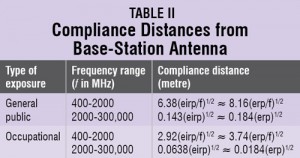 Technically, all radiation and fields of the electromagnetic spectrum that do not normally have sufficient energy to produce ionisation in matter, characterised by energy per photon less than about 12 electron volts (eV), wavelengths greater than 100 nanometres (nm) and frequencies lower than 3×1015Hz, is termed as non-ionising radiation. Clearly, radiation that has enough energy to move atoms in a molecule around or cause them to vibrate or pump an electron to a higher energy state, but not enough to remove electrons, is termed as non-ionising radiation.

On the other hand, ionising radiation has enough energy to remove tightly-bound electrons from atoms and thus creating ions. High-frequency ultraviolet rays, X-rays, gamma rays and cosmic rays are examples of ionising radiation and have enough high energy to strip-off electrons or even break-up the nucleus of atoms and thereby releasing huge amount of energy, which may disrupt the chemical bond and ultimately result in ionisation in the human body.

Exposure to very high levels of RF radiation can be harmful due to the ability of RF energy to rapidly heat biological tissues. Adverse effects (tissue damage) in humans could occur during exposure to high-RF levels because of the body’s inability to cope with or dissipate excessive heat that could be generated. The eyes, kneecaps and testes are particularly vulnerable to RF heating because of the relative lack of blood flow in these organs to dissipate excessive heat.

After examining the problems arising from non-ionising radiations, ICNIRP has developed international guidelines on exposure limits. These reference limits are tabulated in Table I for the frequencies of interest. Here, ‘occupational’ refers to operational and maintenance staff.

Thus, the reference levels for general public and occupational exposure to time-varying electric, magnetic and electromagnetic fields can be easily found for GSM, UMTS, CDMA and WiMAX from Table I. It is noteworthy that these communication systems are strongly time-dependent, so it is required to take average of the measured quantity over a defined period and measurements should be made during time of peak-usage. For example, ICNIRP reference (i.e., field) limits are to be averaged over any six-minute period below 10GHz and over a 68/(1000f)1.05-minute period for frequencies exceeding 10GHz (where f is the frequency in MHz).

Based on the reference levels set by ICNIRP, compliance distances from base-station antenna have been calculated with the help of equivalent isotropically-radiated power in the direction of maximum antenna gain (eirp, in watts) (Table II). The eirp is the product of the power supplied to the antenna and the maximum antenna gain relative to an isotropic antenna. It should always be assured that for distances greater than the compliance distance, the radiation level is under the limit. Thus, three types of exposure zones have been identified: