Input voltages below 60V are considered to be safe to touch. Still, there remains a need for isolation in this operating range. After all, the power-supply electronic load is typically a delicate and expensive microcontroller, so it’s important to protect it. Therefore, even though isolated DC-DC voltage regulators are more complex than their non-isolated counterparts, isolation is very useful in low-voltage power conversion systems.

Through Isolation, you can protect against ground loops, which can produce parasitic currents that could disrupt the output voltage regulation. Ground loops have another negative effect: they can introduce galvanic corrosion of the conducting traces, which degrades equipment reliability. Isolated power supplies are generally used where there’s a need to protect sensitive loads and preserve the long-term reliability of equipment. 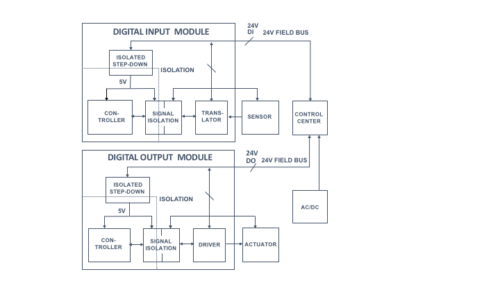 The I/O modules that play a critical process control function in an automated factory offer a great example of low-voltage isolated systems. Figure 1 shows a block diagram of a digital I/O module and factory system. Here, a central hub takes the AC line power and converts it to 24V DC, delivering it to the I/O module along with the corresponding digital input (DI) and digital output (DO) data. Factory environments are indeed harsh for electronic components. So it’s only natural that sensitive electronics would need protection from electric and magnetic interferences and over-voltages.

The programmable logic controller (PLC) in each module is powered by an isolated step-down voltage regulator. A rugged voltage-level translator interface at the digital input module (DIM) powers the sensor, receiving its information and passing it along to the PLC via a digital isolator or optocoupler. On the digital output module (DOM), a similar power, signal, and isolation chain leads to the on-board driver, interfacing to the external actuator. In modern systems, you’ll want to use a power-efficient and compact implementation of the isolated step-down converter in the input and output modules.

The flyback converter is a classic architecture that many engineers choose to produce an isolated output. The flyback converter features a rather complex control loop, which requires an additional voltage regulator to regulate the voltage at the output. An optocoupler can provide the isolated feedback needed to close the loop to the primary winding. However, this solution uses two ICs and several passive components, making it rather costly and inefficient and not particularly efficient in terms of space utilization. 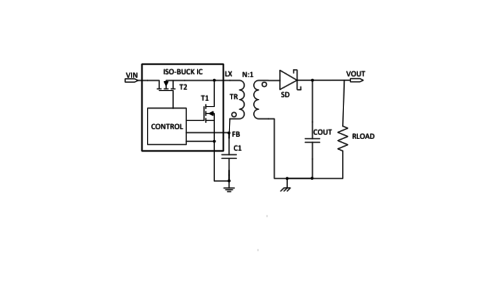