Video shooting is used in many areas now but when you talk about the video shoot capturing the movement of face or object in real-time response is very difficult for the cameraman. moving the camera at the same rate as the face or target object movement is very difficult when you do it manually with your hand. So we have decided why not let’s try to make a smart camera that enables us to shoot video of moving heads in real-time. So today we will make a smart system with some motors that capture the video in real-time detect the face and move the camera along with the movement of the face.

Use the following commands to set up the Python modules in the Raspberry Pi board:

To enable the RPi camera, use sudo raspi-config and then go to interfaces.

After getting the x-coordinate of the face, use it to write position values for the servo motor so that the shaft moves simultaneously with facial movement. This will enable the attached camera to move along as well. 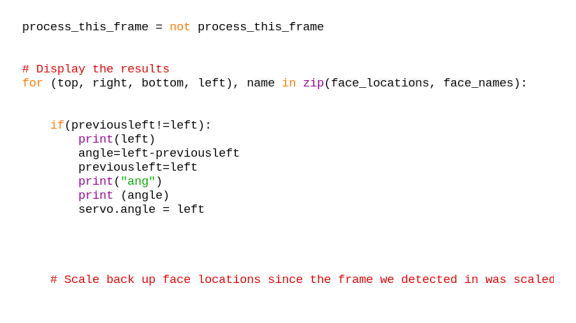 Run the code and move your face in front of the camera. The camera follows the movements of your face with the same speed, making it smooth to shoot a video from any given angle.

The project can be enhanced further for the camera to follow linear/vertical facial movements.