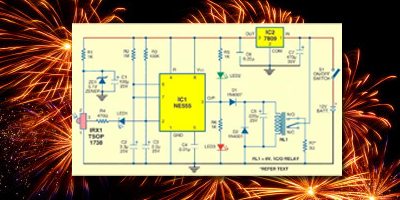 In the figure shown here, normally the output of IC1 is low and green LED2 is ‘on’ and the red LED3 ‘off.’ This indicates that the circuit is ready for use. When any key on the remote control is pressed, output pin 3 of IRX1 (IR receiver module TSOP1738) goes low. This output is connected to pin 2 of IC1 via LED1 and resistor R4 to trigger the monostable operation of IC1.

The output of IC1 remains high for a period equal to 1.1XR2XC2. With the values of the components given in the circuit diagram here, the period works out to 3.5 seconds approximately. This activates relay RL1 and red LED3 glows and green LED2 turns off. ‘On’ state of red LED3 indicates that the firecracker is about to burst.

R7 is a small part of the element of an electric heater (220V, 1000W), which is kept away from the electronic circuit and connected to the relay contacts through a thick electric cable. The resistance value of short length of the heater element (R7) is 3 to 3.5 ohms. A current of around 4 amperes flows through it when connected to a 12V battery. Flow of 4A current through R7 for 3.5 seconds makes it red hot, which ignites the firecracker.

The circuit is powered by a 12V, 7AH battery. IC2 provides about 9V for the operation of the circuit. The circuit should be housed in a metallic cabinet to prevent it from being damaged by bursting of the firecracker. The IR receiver and the two LEDs should be fixed on the front panel of the cabinet.

Wiring and relay used in the circuit should be chosen such that they are able to carry more than 5 amperes of current.