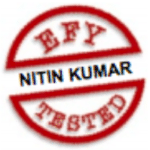 Presented here is a security system that uses an inexpensive laser torch which is usually available with a key ring. The advantage of this security lock is that you can use any laser torch or pointer that is easily available in toy shops. It employs minimal input keys and yet is very secure. It can be used as a door lock, briefcase lock or any other application related to an electronic locking system.

Circuit and working
The block diagram of a laser-based security lock is shown in Fig. 1 and its schematic diagram in Fig. 2. Switches S1 and S2 work as security input keys and switch S3 is used for opening the lock manually. The lock can be an electric strike installed on the door frame to allow access with an access control system or any electronic remote control system.

Opening the lock. The use of switch S2, pressing and releasing of switch S1 and supplying the laser pulses at the right time are the security features of this circuit. Switch S2 should not be released during the entire operation, otherwise the counter will get reset and you will not be able to open on the lock. When switch S1 is pressed, the first in-built timer of IC2 is triggered. Its output pin 5 goes high for four seconds. LED1 glows and transistor T3 conducts. During this time, the collector of T3 becomes low, which in turn pulls the clock enable pin (pin 13) of IC1 to low state. This enables the counter (IC1) to count. During this time, five laser pulses are applied (by you) at photo sensor T1. These signal pulses go to clock pin 14. LED4 glows and T2 conducts at the fifth pulse. This triggers the in-built second timer of IC2. Its output pin 9 goes high for two seconds. The high state is indicated by the glowing of LED2. When LED2 goes off, you press switch S1 and release it. The first timer is triggered again and its output is high for four seconds. During this time, you send another five pulses of laser beam towards the sensor. At the fifth pulse, LED3 glows and transistor T4 conducts. This action triggers IC3 and its output pin 3 goes high for ten seconds. That is, the lock opens for ten seconds.

Construction and testing
An actual-size, single-side PCB layout of the laser-based security lock is shown in Fig. 3 and its component layout in Fig. 4.

Mount the components on the PCB to avoid any assembly errors. Enclose the circuit in a suitable box. Mount switches S1, S2 and S3 at appropriate locations. If the circuit is to be used as a door lock, photo sensor T1, switches S1 and S2 should be mounted outside the door frame. The photo sensor should be enclosed in the box with a suitable contraption so that it can receive the laser beam properly. Switch S3 should be installed on other side of the wall near the door frame.