We often face problem while reading the values of ICs and miniature SMD components, detecting cracks or shorts in tracks in a PCB, or reading a finely-graduated vernier scale. Here is a solution to the problem in the form of a simple optical magnifier that simultaneously magnifies and illuminates the object.

The main constituents of the magnifier are a convex lens with focal length of about 10cm for magnification of the object, a set of eight white LEDs to illuminate the object, an LED driver circuit for powering the LEDs and some other components. Fig. 1 shows the circuit diagram of the optical magnifier.

Two branches of the LEDs are connected in parallel. Each branch has four LEDs connected in series as shown in Fig. 1.

A single-side PCB for the optical magnifier is shown in Fig. 2 and its component layout in Fig. 3. Before assembling the circuit, cut the PCB across the dotted line and assemble the circuit on two separate PCBs as part 1 and part 2. 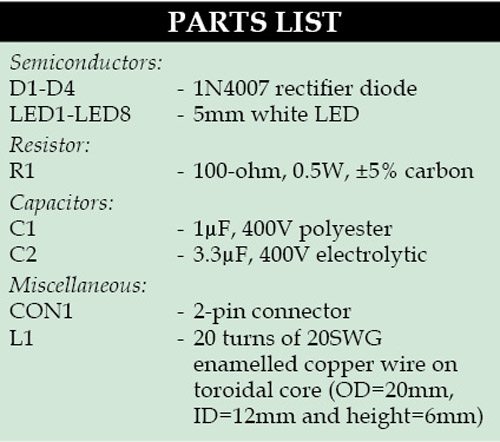 The PCB for mounting the LEDs (part 2) is in annular shape as shown in Fig. 3. LEDs are placed around the lens as shown in Fig. 4. Drill eight holes to house LED holders. You can also have a press-fit arrangement.

Enclose PCB part 2 in the PVC pipe in such a way that light from the LEDs falls on the object but the LEDs do not obstruct the view. Enclose PCB part 1 in the side tube. Power PCB part 1 by connecting it to the mains by a flexible power cord. Ensure proper wiring insulation to avoid shock while using the magnifier.

The arrangement shown in Fig. 4 is schematic and not to scale. The outer diameter of the lens will decide the overall arrangement. You will have to make suitable clamps to hold the lens and PCBs inside the tube. The prototype used by the author is shown in Fig. 5.