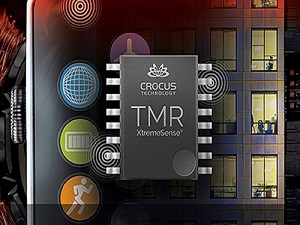 Based on different physics phenomena, the TMR effect is the property of a device to change its electrical resistance value under the influence of an external magnetic field, allowing the electrical detection of all kinds of magnetic fields in various applications.

The core of XtremeSense TMR technology incorporates a thin-film magneto-resistive device called Magnetic Tunnel Junction (MTJ). The MTJ consists of two electrically conducting magnetic layers on either side of a thin (nanometre-scale) but highly robust insulating layer. One magnetic layer has a fixed magnetic moment direction while the other can change freely to follow the direction of the local magnetic field. Although the thin insulating layer should prevent any current flow between the two magnetic layers, electrons tend to ‘tunnel’ across the atoms of the thin insulating material, with a resistance that depends sensitively on the relative orientation of the two magnetic layers. Therefore, as the Free layer magnetisation follows the direction and intensity of the ambient magnetic field, its magnetic orientation gets modified with respect to the Reference layer, causing a change in the relative magnetic orientation, probability of quantum tunnelling between the two layers and subsequent electron flow through the device.

Sensors with CrocusXtremeSense TMR are top-notch of the TMR technology, having the MTJ element integrated with the CMOS process. This allows a small die size, better costs and better technical performance.