How Smart Can Your City Get

Cities are becoming smart all over the world, including India, by using technology in various ways. Some define a smart city as a city studded with sensors, which collect information to help manage the city’s assets and resources efficiently. Others say it is the use of information and communication technology (ICT) to transform life and working environments within a region.

But, the Indian government’s Smart Cities Mission website probably says it best: “There is no universally accepted definition of a smart city. It means different things to different people. The conceptualisation of smart city, therefore, varies from city to city and country to country, depending on the level of development, willingness to change and reform, resources and aspirations of the city residents. A smart city would have a different connotation in India than, say, Europe. Even in India, there is no one way of defining a smart city.”

Largely, a smart city infrastructure aims to make life easier and safer for citizens. It provides basic facilities for housing, healthcare, sanitation, food, commutation and communication; reduces pollution; improves sustainability and supply of energy; and fosters business and economic welfare in general. However, what goes into a particular region’s infrastructure and the priority accorded to each element is very region-specific. While a system that helps to accurately display the arrival time of city buses at each bus stop might be smart in a city, a good toilet might be smart in a remote village, and a method of protecting dwellers from wild animals might be the ultimate tool for a tribal settlement in the forest! Merely embedding technology across a city’s functions makes the city intelligent. The city becomes smart only when this technology meets the citizens’ demands and improves their quality of life.

In the journey from mere intelligence to real smartness, technology is just a tool—and at different points of time, various technological products like sensors, cameras and drones, mobile devices and apps, data centres, networks and software appear and disappear from the scene. It is therefore difficult to describe one particular end-to-end solution and say this is the perfect smart city infrastructure. Depending on the local needs, city planners need to pick and stitch together the tools that would work for them. 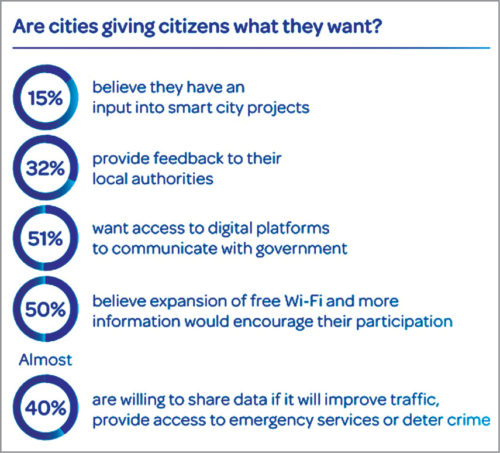 IoT and open data policies at the core

The Internet of Things (IoT) definitely helps make a city smart. Innumerable sensors, mobile devices and video cameras, embedded across the city’s infrastructure and connected over a reliable communications backbone, collect data about everything from traffic to pollution. This data is analysed to extract useful information, which, in turn, is used to implement effective city management systems, ranging from efficient waste collection to traffic signal management. This information enables automation, disaster prevention and recovery, efficient supply and consumption of utilities like water and power, and more.

To be effective, this IoT infrastructure needs to be supported by an apt open data policy to enable universal access and use of the collected data without duplication. Government agencies can also authorise private enterprises to access such databases in order to get the most out of the data in a profitable way. For example, a private company developing a traffic management system can be allowed to access data collected by the existing infrastructure, for a fee, instead of having to redo the whole thing. This not only turns the government’s investment profitable but also makes the infrastructure more streamlined without too much duplication.

A Gartner report adds one more important element to this framework—people. According to Gartner, people themselves will become nodes on the Internet, with both static information and a constantly emitting activity system. Today, there are multiple apps that use crowd-sourced information to make better buying decisions, avoid traffic congestion, explore places and more. It is only fair then that people are considered one of the main resources of a city’s smart infrastructure! 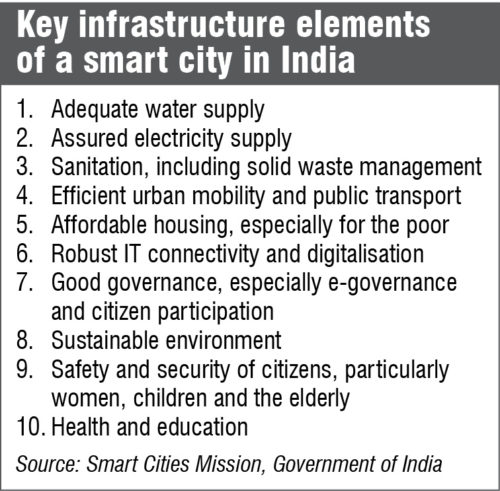 Trip to some of the smart cities

Apart from some of the districts in USA and UK, Aarhus, Amsterdam, Cairo, Lyon, Malaga, Malta, Verona and the Songdo International Business District near Seoul are among regions that have become appreciably smart in many ways in recent years.

Las Vegas uses its smart city infrastructure to manage traffic, environmental pollution and other issues. Let’s take the example of its traffic signals: If your car is waiting at a signal and there are no approaching vehicles in sight, the signal turns green rather than making your car wait and exhaust more fumes.